by The Brothers Grimm 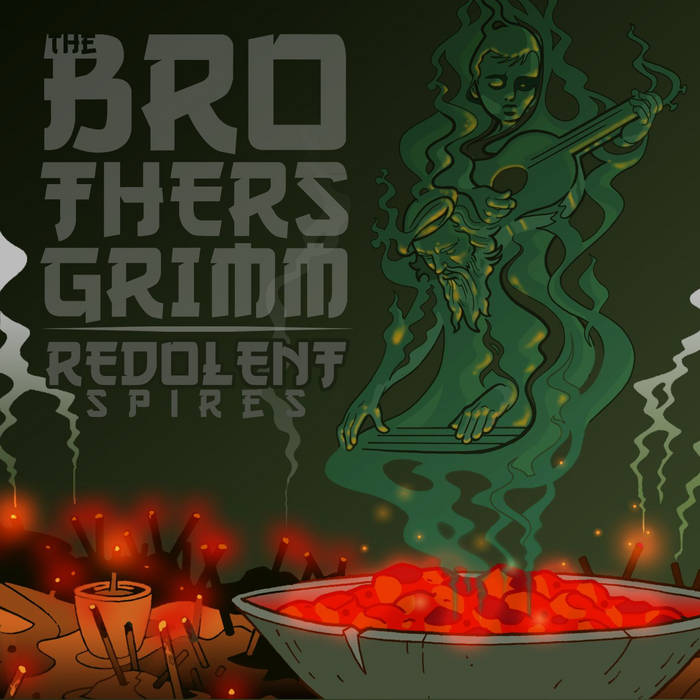 Side A is a six movement suite for cello and guitar, composed and performed as a live score for THE LIVES OF CUT FLOWERS. LOCF was premiered May 2011 at the Indy Fringe Theater by the paperStrangers Dance/Theater co, codirected by Tommy Lewey (choreographer) & Jessica Strauss (playwright). The show was unique in that we had a six movement dance work on video to score too, but we were not allowed to collaborate directly with the playwright until we arrived for dress rehearsals...then we slammed it all together! The show centered on a theme of distance and love, with dancers physically realizing visions of the main character’s inner mind. Our movement titles are inspired by Act IV.5 of Shakespeare’s Hamlet. During this scene, mad Ophelia gives flowers to members of Danish royalty and court. Through layered cultural associations by the particular flower given, she exposes each character’s true virtue and deeds. In our suite, every flower approximates character, emotion, and essence of the word and dance to which our music scored.

Side B comprises of nine improvisations in four different tunings on guitar and guqin. Two of the tunings are traditional guqin modes (F Mj, Bb Mj), the other two are custom tunings (A Samant Sarang, Db Mj^7). The four Japanese titled pieces are brief and suggestive dances revealing the nature in which our live improvisations arise. For these tracks, the guqin is tuned in a traditional F Major mode. The Rondeña on our album combines floral melismatic textures of instrumental Rondeña with a cante middle section emulating Flamenco vocal tradition. Simple, elegant, nostalgic.

Stochastic Contexture is a two part ‘flip the coin’ chance piece on the subject of texture parameters; loud/soft, fast/slow, wide/ narrow. The custom guqin tuning employed fits to Raga Samant Sarang tonic to A - a lovely early afternoon Hindustani Raag. Directions: use a coin to create texture cells for two players: Player 1 Tails. Player 2 Heads. First, flip to decide for which player to assign parameters. Flip for dynamic, then range, and density. Repeat this process for the other player. Flip to decide the transition at the end of the cell, will it be one or both players? If it is only one player, flip for which player is to execute the transition. By this process, four cells were created in which we explored raga samant sarang within our assigned textures. Ex. Cell A:: Player 1: soft, wide, slow:: Player 2: loud, wide, fast:: Transition: both.

Our final piece, Chakpur, is a reflection in a custom Db Major guqin tuning, accompanied by screw and hollow metal brush. On July 4th, 2011 Brian was fortunate to performed solo guqin improvisations for the Tibetan Monks of the Drepung Loseling Monastary. He spent the rest of the day with them as they worked on their colorful sand mandalas. The buzzing sounds of their chakpur funnels were extremely conducive to meditation. Never before had he considered the centering, quieting properties a wash of metal noise could create. In attempt to reproduce that effect with “the poor man’s chakpur”, we used screws and hollow brushes.


古琴
Guqin, an ancient seven-stringed bridgeless zither, with a documented history of four thousand years, is one of China’s most important cultural instruments. Symbol of the Confucian sage scholars and Daoist literati, guqin possesses the largest and longest running solo repertoire of any string instrument in China. Developing throughout the Warring States period (475-221 BCE) in Classical China, its philosophical performance doctrine became rooted in Confucian and Daoist ideologies. With down tempo unmetered melodies, quiet volume, and dulcet timbre this zither guides the listener through meditation. Guqin’s silk strings traditionally typify purity and determination in classical Confucian thought. As the instrument progressed, a rift formed between its two aesthetic schools. Confucianism holds the social, political, moral, and emotional qualities in a piece of music to be inherent. Xi Kang (223-263 CE), a qin scholar from the Seven Sages of Bamboo Grove, challenged this in his poetic essays. Xi debated in Daoist sentiment that structure and form account for beauty in composition, and that emotion in music is subjective to interpretation of the individual. Daoists believe music to be a natural phenomenon. Therefore, qin should be experienced in lofty mountains, by flowing streams near shady forest trees. In such a setting, the qin scholar partakes in the Daoist tradition of returning to nature. These terrains help the instrumentalist moderate breathing and meditate while playing zither to achieve a quiet inner stillness. This practice developed into Qindao, literally “zither Daoism,” but more poetically translated as the way of guqin. In Qindao, the calm tones of guqin are utilized as a tool to cultivate the mind toward Enlightenment through meditative music. It is encouraged to share the Qindao practice while burning incense and drinking tea in the company of kindred spirits.